The Supremes, The Stooges and other tales of Detroit: 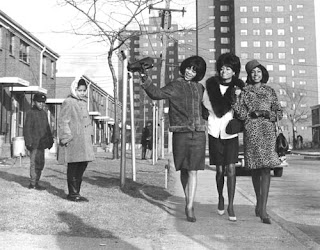 I think of Detroit City......I think of that once great “City Upon A Hill,” symbol of everything good and right in mid twentieth-century America----ingenuity, industry and optimism. And then I think of pictures of another Detroit, a more recent Detroit.....of violence, abandonment and decay; of broken dreams...

I've read recently that Detroit is on it's way back up, that industry is moving back in, that brave young professionals are renovating houses and revitalizing neighborhoods; that city finances are more secured and violence is declining. But I fear the real bottom of Detroit is yet to be found....that it will be known only when a Starbucks coffee shop will be found on every corner and trendy boutiques on every street. Gentrification----that ubiquitous bland-ification that robs everything real and genuine from a city's soul is the newest threat. In smoothing out rough edges and scraping away the grit there is real danger; danger that the new Detroit will have lost its soul and will become nothing more that another bland American city, attractive to young upwardly mobile, hipster professionals....but really just a parody of its once great self. It's soul will be dead, never again to inspire the great things of the past.

Detroit was always a city of dreams; the dreams of Henry Ford, William C. Durant, Walter Chrysler and a thousand other less known automotive visionaries. And it was also always a city of broken dreams; where many a man from the American heartland trekked in search of security and wealth in the great modern industrial factories only to leave disheartened, disillusioned and broken. Like the factory worker in Johnny Cash's “One Piece At A Time” or Bobby Bare's "Detroit City" they were allowed to come to the well but they were not allowed to drink from it, even as they were building dreams for others to enjoy.


This week I learned from Francesca at www.soulkitcken.blogspot.com that punk rock first formulated in Detroit----not in New York or London like I, and probably everyone else, had believed. So here, in the great shining city in 1967 is born (surely by difficult cesarean) The Stooges, another group of disillusioned and disenfranchised white men. But unlike the rural-born and raised laborers from Kentucky and Ohio of Johnny Cash these are the suburban children of Detroit and they have not toiled in factories; their grievances are different and their method of protest unfamiliar; they are not broken by the monotony and tedium of the assembly line but they have seen how it's piece-work has robbed their parents of the self-dignity of the craftsman and has substituted in its place a hollow materialism as their only reward for a life of grueling repetitious labor. They find no virtue in their parent's labor and see no earthly or spiritual fulfillment in this nightmare of endless conformity and monotony in industrial and suburban America. Their protest becomes a howl of existential nihilism, all is absurd and without meaning----especially their own lives.....they abuse and deface their own bodies...

I've never really understood the culture of punk rock even if I have appreciated its music, it's energy and it's influence. In my youth, sharing and coexisting in a space with the punks, it all just seemed like a big old load of bullshit to me, all of that posturing, self-imposed alienation and contrived frustration and disillusionment that appeared to be an act that could be played only within reach of the security of the parental home; sure, the band must practice its nihilistic and anarchist roar in some garage......but in a garage that is probably also home to dad's Cadillac.

As an adult, with knowledge well beyond the confines of the small city of my youth, and with punk's historical legacy and importance established and more clearly understood, I have come to see it differently. I no longer question the validity of its dissatisfaction and alienation from mainstream society. Now, I have come to see punk as a form of symbolic resistance: flamboyant, aggressive---even intimidating at times but ultimately safe and benign; of no real threat to me or to the status quo; only a pantomime to draw attention to real and perceived injustices. And that is okay, I get it: sometime the prophets come only to warn, not to try and fix things.

But this only brings me right back to where I had a problem with punk as a youth----it's impracticality. Surely, even the nihilist must eat and unless he wants to live as a true primitive hunter-gatherer he must think of his next meal....and his next after that. So ultimately, no matter how long denied and postponed, this must necessitate getting a job. But who except his own kind or a sympathetic family relation is going to hire that kid with the colorful Mohawk and facial piercings.....or body mutilations; whose fashion is literally a never ending protest?

No, this surely is not my scene and The Stooge's Detroit certainly not the Detroit that has propelled my dreams. My Detroit is pure Motortown----that mythical place filled with shining new cars adorned in chrome, of mid-century glamour, of well groomed young black faces, and the music of earthly-heavenly angels singing the Holland-Dozier-Holland mythologies of young love and heartbreak. This is an uncomplaining Detroit, a place of towering visions of innocent love, the trials of love, and the triumph of love over all else. And it exists side by side with the harsh realities of African-American identity and its unimaginable challenges in the 1960s. But how can this be?

Surely, I first heard The Supremes during the months of 1966 and 1967 while still in the womb because no sooner had I entered this world than at any time, and at any place, the moment I have heard “The Girls” my heart has quickened and my soul stirred. Diana, Mary and Flo were an ever present part of my childhood, regularly materializing as if by magic from the airwaves over the car radio and, in truly lucky moments, over the television set (I am very happy that in my childhood innocence I did not realize that these were re-runs from some precious years before).

And I am absolutely certain that it was The Supremes who first caused me to become aware of the female species----of some great mystery surrounding intelligent and beautiful women. How marvelous they always looked and sounded and I definitely wanted to know more!

As a teenager, The Supremes and other classic Motown performers were not to be found so frequently as before on the radio but by now I had adopted an identity and style and was associated with a group of friends who worshiped the sounds of 1960s Detroit---and through it we expressed our own dissatisfaction with the square, overly materialistic and spiritually empty world. This we did this by simply living---really living---in the present. We formed or attended Motown themed dance parties, dressing in 1960s Brooks Brothers and Hart Schaffner & Marx suits that had been handed-down to us from our fathers, but newly tailored to fit to perfection the contours of our young bodies. We rode our Vespa and Lambretta scooters with Diana Ross-inspired-short-haired girls sitting behind us, their bodies pressed firmly against ours as the love songs of Motown played in our minds. Certainly, this was living the life of that mythological Detroit of The Supremes, The Miracles, The Four Tops, The Temptations, and all. 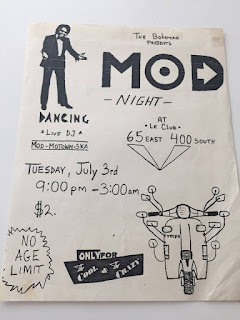 But one must surely wake from this blissful dream the next morning and face the cruel realities of the world. But it is here where the traditions of that shining Motor City became truly remarkable because here, out in the world of work, toil and all the challenges of everyday life, is where a discernible strategy for living that is implicit and ubiquitous in all Motown's music became visible---that is, it being born of, and at its very roots belonging to, the African-American traditions of the blues and jazz, the soulful pop music of Detroit is of a custom where, no matter how great your problems you don't complain and you bring joy to the music. 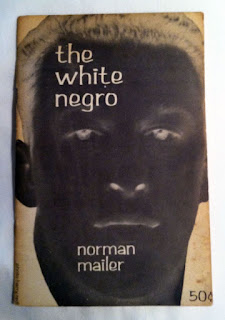 Originating in the cruelty of slavery, this music was formulated to allow one to live in the reality of a world of oppression but to allow one a way to cheer oneself up and rise out of his or her problems. And like Norman Mailer's White Negros of the modern jazz age we discovered through this joyous and enchanting music that the African-American had developed a true existentialist lifestyle---not the academic existentialism of Sartre and others, but a true, practical existentialism-----of living in the moment and finding happiness and pleasure when and where it exists----as a means of survival in a hostile world. We learned too that the greatest form of protest against “The Man” was not the self immolation of the suburban white punk or the endless lament of the countryman, but in finding a way to succeed on ones own terms, without selling out and definitely not by giving in, or setting aside the precious things that made our hearts sing and our souls swell. That we dressed like “The Man”----only sharper, with greater attention to detail----only made it easier to penetrate his world, gather up what we believed we were entitled to and then attempt to tear down his oppressive world, all the while looking great in a brand new pair of (very) expensive shoes and Italian sunglasses!

So...here I sit a man at mid life. A middle aged modernist! I still love The Supremes and Motown as much as I ever have. These are the sounds that have soothed my soul and lifted my spirit through countless hard times and have caused me to sing out with them in the good times and moments of great joy. I really hope the best for the new Detroit but I fear much is sure to be lost in its rebirth. But it has had too many bad days and too few good days in recent years and something must change. Certainly, The Stooges somehow were the unlikely harbingers and messengers of Detroit's darkest days. But what shall come next---where is the Berry Gordy and the Motortown Revue of today when it is really needed?

Meanwhile, I still do not understand how the truly anarchist punk finds his next meal---perhaps he eats at the sympathetic and hospitable table of Francesca------if he does he surely eats well! Her Spaghetti crudisti di zucchine con pesto e pomodorini is as beautiful as it is delicious and is but a pinch of parmesan from sitting just right with the conscience of even the most dedicated protester of today---the vegan, and her concern for the welfare of all our earth's inhabitants. Francesca's infused waters seem the perfect refreshment on a hot summer day in any city---even if one knows that the city, like Detroit of recent years, will likely burn by the arsonist's fire later that night! 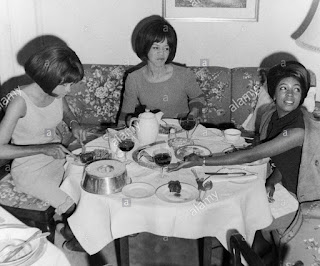