That'll Be The Day: The Duke, The American West and Rock 'n Roll 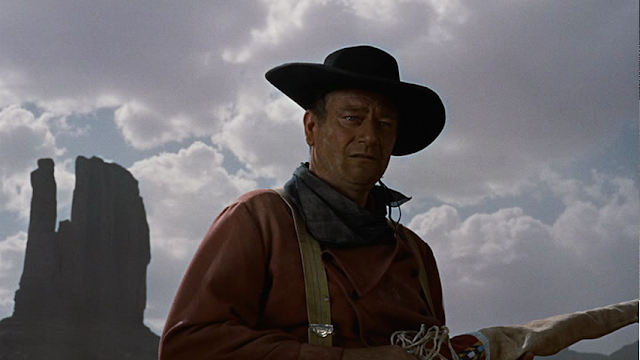 By now everyone in my universe must know that I am absolutely crazy about classic Hollywood cowboys-----Tom Mix, Gene Autry and John Wayne; Ward Bond, Gary Cooper, Gregory Peck, Randolph Scott, Gordon MacRae and Glenn Ford; and the great "spaghetti western" cowboys of the 1960s and 70s, Clint Eastwood and Lee Van Cleef.

There are so many western movies that I love it is difficult to remember them all but among my favorites-----Stagecoach of 1939 (and also the Ann Margret and Alex Cord remake of 1966); High Noon of 1952, The Gunfighter of 1950 (that first scene of a mustachioed Jimmy Ringo/Gregory Peck in the saloon!); The Tall T of 1957, Oklahoma! of 1955 and the original 3:10 to Yuma of 1957 (how the hell could someone even think to remake such a movie----and then to place in a starring role that moron Russell Crowe!); Hang 'em High, Fistful of Dollars, High Plains Drifter and Butch Cassidy and The Sundance Kid.

But as a rule, it is probably the westerns of the great John Ford, filmed in the magnificent and astounding Monument Valley of Utah and Arizona, that I love most. Of these, for me, it is Stagecoach and The Searchers of 1956 that stand out as Ford's best. Stagecoach is simply magnificent----it's only diminishment being that it was filmed in black and white and thus not able to completely communicate the grandeur of the landscape backdrop upon which this epic was placed. In The Searchers, however, Ford completely resolved his earlier limitation and in this film he was able to combine an epic story with rich color photography and a matured John Wayne to create a masterpiece. That this movie was one of the first twenty-five films to be deemed "culturally, historically, or aesthetically significant" by the United States Library of Congress, and selected for preservation in it's National Film Registry; that is has repeatedly been selected as the "Greatest American western" ever made by critics and the public, and that it is repeatedly referenced in other films, from Lawrence of Arabia to Star Wars, is testament to its powerful and lasting influence on audiences and filmmakers.

But less known is the influence this film has had upon music----and here I will defer to a 2005 essay by Jeffrey K. Smith, M.D. to explain how it began:

"It all began on Thursday May 31, 1956. Buddy, J.I. Allison (the Crickets future drummer), and Sonny Curtis (Buddy’s off-and-on bandmate) saw the debut of the John Ford western “The Searchers,” which was playing at the State Theater in Lubbock, Texas, where the boys lived.

John Wayne, the lead actor, portrayed a cowboy searching for his niece who had been captured by Indians. During the movie, Wayne’s character utters a line of bravado: “That’ll be the day.”

A few days later, Holly suggested that he and Allison write a song. “That’ll be the day,” J.I. jokingly replied, mimicking the line from “The Searchers.”

“Yeah, that sounds like a good one,” Buddy replied.

As Allison recalled, it took Holly “about 30 minutes” to write the song. From day one, Buddy Holly was certain “That’ll Be the Day” would become a hit record.

“That’ll Be the Day” followed a circuitous and most unusual path to the top of charts. On July 22, 1956, Holly first recorded the song for Decca Records in Bradley’s Barn on Nashville’s famed Music Row. Paul Cohen, Decca’s Director of Artists and Repertoire (A & R), and Owen Bradley, the session producer, spent an unsuccessful year trying to make a country and western singer out of Buddy Holly. After 19 takes, Bradley proclaimed “That’ll Be the Day” as “the worst song I’ve ever heard.”

After his record contract was not renewed by Decca, an ambitious and driven Holly took his talents to Norman Petty Studios in Clovis, New Mexico, 100 miles west of Lubbock. On a subfreezing night in late February of 1957, Buddy (lead singer and guitarist), J.I. Allison (percussionist), Larry Welborn (stand-in bassist who would later be replaced by Cricket Joe B. Mauldin), and Nikki Sullivan (rhythm guitarist), joined by three background vocalists, and, together, recorded “That’ll Be the Day” in only two takes. “I’m Looking for Someone to Love,” the single’s flip side, actually took longer to record.

The rock ‘n’ roll version of “That’ll Be the Day” was more energetic and lower pitched than the countrified version recorded in Nashville. The record is classic early rock ‘n’ roll with a driving, rhythmic beat sometimes referred to as the “Texas Shuffle.”


Norman Petty traveled to New York with the demo record, determined to sell it to a record company. Mitch Miller, Columbia Record’s Director of A & R, had no interest in “That’ll Be the Day,” proclaiming “rock and roll is just a passing fad; I give it six months.” However, Peer Southern Publishing’s Murray Deutch had a decidedly different opinion about the record: “I just flipped for it.”

After Deutch played the record for the A & R Directors at ABC and Atlantic records, he was rebuffed. Undeterred, Deutch took “That’ll Be the Day” to Bob Thiele, A & R Director for Coral Records. Thiele was so impressed with the demo that he did not even ask for a master recording.

However, when Thiele played the record for the president and vice-president of Decca Records, the song was ridiculed as “junk” and a “joke.” After Thiele literally threatened to resign, Decca executives allowed Brunswick, its least prestigious subsidiary label, to release “That’ll Be the Day.” Even then, only 1,000 initial copies of the record were pressed.

When “That’ll Be the Day” was released on May 27, 1957. “Billboard” magazine rated it as mediocre—“medium rockabilly” whose “performance is better than the material.” Then, the record followed a most unconventional route. Starting slowly on the national level, its regional sales eventually drove the single to the top. George Woods, a disc jockey at Philadelphia’s 3 WDAS, and Tom Clay (using the professional name Guy King) at Buffalo’s WWOL, played “That’ll Be the Day” so often, its popularity spread like wild fire.

On July 29, 1957, six weeks after “That’ll Be the Day” was released, “Billboard” magazine now characterized it as a “best buy record.” Not quite two months later, on September 23rd, “That’ll Be the Day” climbed to number one on “Billboard’s” popular music chart. For three consecutive months, the record remained in “Billboard’s” Top 30. By the end of the year, “Cash Box” magazine named Buddy Holly and the Crickets as the “Most Promising Vocal group of 1957.”

The song that took so long to reach the top eventually became a rock ‘n’ roll anthem."


Holly's recording was soon discovered on the opposite side of the Atlantic by a young and burgeoning Merseyside skiffle and rock 'n roll scene. One group was so enamored of Holly and his Crickets that they renamed themselves from "The Quarrymen" to "The Beatles" in reference and honor of their idols.


Another, simply went straight to the source, finding direct inspiration in the John Ford movie and thus styling themselves "The Searchers" after the very film itself.


Meanwhile, and sometime a little later and back in the States, the Statler Brothers would record charming country-tinged pop tune, again inspired by those same words uttered repeatedly by John Wayne's character, Ethan Edwards in The Searchers, and again, like Buddy Holly, relying upon that very phrase for a title.


Of these homages to The Searchers, it is absolutely the Statler Brothers' that is my very favorite. It is forever linked for me with a grand western road trip adventure driving across the red-rock deserts of the Colorado Plateau from Utah to Arizona with my young son Gianni----my absolute favorite cowboy of all time at just ten-years old----while we were in search of an irresistible treasure: a pair of unmounted and unused Stein and Marius Eriksen "Streamline" skis from the late 1950s located somewhere in Phoenix; indeed, a real-life  "search" adventure and journey across the West of our very own!

We left Utah in the afternoon and drove all through the night to arrive at our destination. Early, the next morning we located the skis, purchased them and then began a leisurely trip northward to home; we crossed the Sonoran Desert and climbed the Mogollon Rim, stopping in Flagstaff for lunch and then purchasing another two pair of vintage skis at an antiques shop. Our car now heavily laden with loot but still feeling just as luxurious in its ice cold air conditioned cabin, deep leather seats, wood trimmed interior and while holding the reins of the powerful horsepower of supercharged Buick V6, we resumed our journey listening to a bilingual radio transmission originating from the capital of the Navajo Nation in Window Rock, Arizona.

As we reached the Marble Canyon, crossed the Colorado River and made our way across the House Rock Valley, passing the hamlets of Vermillion Cliffs and Cliff Dweller, and then climbing up the Buckskins towards the Coconino National Forest, we began to lose our reception of Window Rock and it was a CD of Statler Brothers that carried us across those last miles of Arizona and down the backside of the Buckskins, into Freedonia and across the state line into Kanab.

After another stop for gasoline, dinner at Houston's Trail's End, then onward up the road through the Long Valley; up and over the Tushar Mountains following the route of the Old Spanish Trail and onto Interstate 15 for the last, easy three hours drive home.

We probably listened to the Statler Brothers' "That'll Be The Day" ten times that day.

And it is sure to be listened to at least that many times in the next days as I go to collect my son from from the Marine Corps for his first ten day leave and we then drive the long, wonderful road back home. 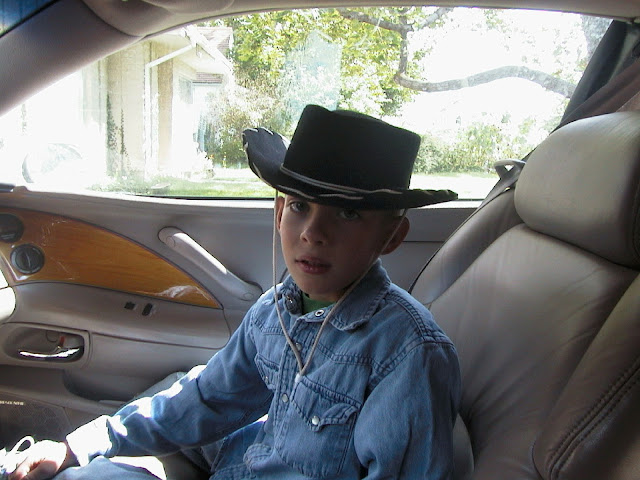