When dark clouds gather in my world.....when I am feeling disheartened, blue and beaten, it is music that I turn to for solace; in it I forget my troubles and my spirits are lifted. Inevitably, while engaged in this wrestling within my soul and working through challenges in my brain, the lyrics of an old and wonderful song will cross my mind, a song designed and built from the ground-up, it seems, expressly for the purpose of coaxing an ailing spirit back towards happiness----You've got to accentuate the positive, eliminate the negative, latch on to the affirmative......and then I will also remember the story about the very man who penned those lyrics.....

Disheartened, battered and beaten, the young lyricist Johnny Mercer set out upon that familiar journey of retreat home, away from the from the bright lights, elusive glamour and the fickel promises of Hollywood.  Just months before he had been lured westward from modest success and security of New York's Tin Pan Alley by visions of greater success and even stardom in Hollywood. But now, after working on two films that had flopped, his studio contract was not renewed and suddenly he found himself out of work in the depths of the Great Depression. And so, he and his young wife retreated to the security of his roots in Georgia.

It was a six day drive back home----three of which were required just to cross the state of Texas, and it was there that Mercer saw something that caught his eye: cowboys dressed in fancy rodeo clothes, boots, spurs and “ten-gallon” hats and driving cars and trucks----not riding the horses so essential to the cowboy mythology!

With his California disappointment still raw, Mercer perceived that what he was seeing was a fiction and myth created wholey by Hollywood: this was the age of the singing cowboy and there in the in the towns and cities of Texas, he realized, life was imitating art. Writing on the back of an old envelope he vented his frustrations into verse and within fifteen minutes he had translated the image of everything he was seeing into a charming but barbed comedy song complete with a jaunty and rollicking melody----and biting satire of clip-clopping horse hooves!

I'm an old cowhand
From the Rio Grande

But my legs ain't bowed
And my cheeks ain't tanned
I'm a cowboy who never saw a cow,
Never roped a steer 'cause I don't know how
And I sho' ain't fixin' to start in now.
Yippy I O Ki Ay,
Yippy I O Ki Ay.

I'm an old cowhand
From the Rio Grande
And I come to town
Just to hear the band,
I know all the songs that the cowboys know
'Bout the old corral where the doagies go
'Cause I learned them all on the radio
Yippy I O Ki Ay,
Yippy I O Ki Ay.

I'm an old cowhand
From the Rio Grande
Where the West is wild,
'Round the Border land
Where the buffalo roam around the Zoo,
And the Indians make you a rug or two...
And the old Bar-X is a Bar B Q
Yippy I O Ki Ay,
Yippy I O Ki Ay.

Sonny Rollins' 1957 interpretation of Mercer's
"I'm An Old Cowhand" is a towering modern jazz
masterpiece that helped to cement his status as
one of the greatest saxophonists---ever!

Mercer's darkest hour had just passed. He returned to Hollywood with his new song in hand and with assistance from his friend and idol whom he had followed west from New York City, Bing Crosby, the song was selected for inclusion in the 1936 movie Rhythm on the Range. Crosby, one of the fastest rising stars in Hollywood at the time, sang the song in the film----accompanied by an eclectic chorus that included the the unlikely and uncredited combination of young a Louis Prima and a young Roy Rogers. It became an an immediate and smash hit, rising to the #2 chart position. Suddenly, Mercer was in demand and offers of work began to pour in.

Almost immediately, Mercer scored again ---this time needing no assistance from Crosby---with “Goody Goody”, a song that he had written a few years earlier in New York and had stashed in a drawer and forgotten. Now, in California and in desperate need of another hit to perpetuate the momentum created by "I'm an Old Cowhand," he rediscovered it and pitched it to Benny Goodman who assigned the vocal chores to a reluctant Helen Ward and recorded it with his orchestra. It rose to the #1 position in the Your Hit Parade charts and stayed in that position for four weeks.

Frankie Lymon scored a #20 hit with his charming version
of Mercer's"Goody Goody" in 1957---twenty one years
after it had been a #1 hit for the Benny Goodman
Orchestra with Helen Ward!

Now, just several months removed from that fateful three-day long trip of defeat across Texas, the situation of Mercer's life had changed entirely: he was on top of the world and a foundation for continued success in Hollywood had been all but absolutely assured. And absolutely assured it would become: over the remaining years of the 1930s and straight through the 1940s Mercer would follow one success with another-----writing hit after hit that would be recorded by the finest artists and musicians of the day----Louis Armstrong, Ella Fitzgerald, Billie Holiday, Frank Sinatra, Benny Goodman, Nat King Cole----and everyone in between; in 1942 he established Capitol Records, which he would personally direct and nurture into one of the greatest, most artistic recording labels anywhere and the sole major label on the west coast.

In the following the decades he would continue to write and his songs would receive, with astounding regularity, Academy Award nominations and awards. And then as his earlier songs acquired patina and character with age they were re-recorded by the same singers who had recorded them earlier but who, like Mercer's songs, had continued uninterrupted through the passage of time to reveal rich, new and unexplored depths. 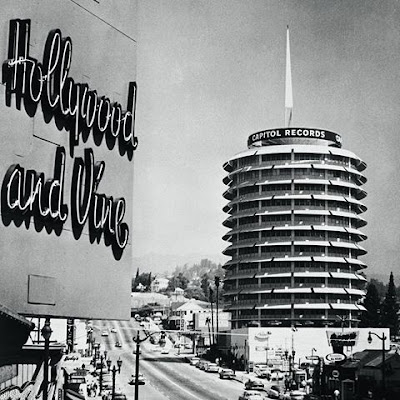 Capitol Records Building, Welton Becket and Associates, 1956.
The coolest building on the planet!

At this same moment a new generation of pop singers and jazz  musicians were discovering Mercer's music, then often some fifteen or twenty years old, and they breathed yet another new life into it with their youthful and contemporary interpretations and arrangements.

And then something happened-----Mercer's music, which included some 1,500 songs,  became that rarest of all things:  a very part of the fabric of American culture and life; something ubiquitous and so familiar that is almost anonymous and beneath consciousness; it is just "there" and seemingly always has been, from the very beginning of time.

Not bad for a guy who had once stumbled----but then dusted himself off and found himself again somewhere out there among the cowboys along a road through Texas. And it just goes to show, one never knows what is around that next bend in the road or what lies up and over that next hill. Latch on to the affirmative!

Aretha's very sweet and youthful take on Mercer's
"Ac-Cen-Tchu-Ate the Positive" from 1962.