The Death of an Avenger

“The world is not pretty,” he said. “It's only the hard work of some people that makes it so. Remember that, Nellie."

Seventy-five years ago today, beginning at precisely eight o'clock in the morning, the U.S.S. Rudyerd Bay, a Casablanca Class escort carrier----a “baby flat top”---of the U.S. Navy 5th Fleet-----the famed “Big Blue Fleet”-----turned into the wind and began launching a flight of four TBM Avenger torpedo bombers off her deck. Their destination----Iwo Jima, the volcanic island, fifty miles distant where Imperial Japanese troops huddled in deeply entrenched fortifications and grimly waited as thousands of U.S. Marines, laying just off shore, slung themselves over the sides of their troopships, climbed down great rope nets and assembled themselves into countless smaller boats that would carry them across these rough edges of the Pacific to waiting beaches where they would engage the Japanese defenders and meet their fates.

Aboard each of the “Rudy's” Avengers was a crew of three flying sailors----a naval aviator and commissioned officer who piloted the airplane, and two enlisted men----a radioman, and a ball turret gunner. On this particular day each airplane also carried a member of the U.S. Marine Corps, observers of the 5th Amphibious Corps, riding along in improvised seats between pilot and the rearward facing turret gunner and whose jobs it would be to provide coordination between the Marines who would emerge from the sea to assault the island and the great flocks of U.S. Navy airplanes overhead who stood by ready to support them by bombing and strafing their enemy.

Piloting the lead Avenger was Lieutenant Commander Frank J. Peterson, Commanding Officer of Composite Squadron Seventy-Seven (VC-77), a native of Pennsylvania, thirty-six years old and married with three young children. Peterson had been accepted into the United States Naval Academy at Annapolis in 1929 but had withdrawn after his Youngster Year and had then embarked on series of jobs in the emerging air transportation field and in the Merchant Marine before re-entering the Navy in 1936 as an aviation cadet. Shortly after graduating Peterson married his sweetheart on a trip to Villefranche-sur-mer, France in 1938 and when war broke out in the Pacific, Peterson was ordered to cruiser duty aboard the U.S.S. San Francisco before being promoted to command squadron VC-77.

Sitting directly behind him in the improvised observers seat was Marine Corps Major Raymond Dollins of Virginia. Attached to the 5th Marine Division, Major Dollins was to serve as the Chief Aerial Observer of the invasion forces. He was twenty-eight years old, married and a graduate of the the Virginia Military Institute, having received his commission in the Marine Corps in 1939.

Below Major Dollins within the fuselage belly of the Avenger and manning the radios was twenty-six year old Aviation Radioman 1st Class Merlan Emberson of Monrovia, California. Emberson had joined the Navy six months before war had come to American and had previously served with a torpedo squadron assigned to the U.S.S. Enterprise. He was married and on this day had a twenty-month old daughter who he had last seen when she was just six weeks old.


And finally, tucked into the small, cramped glass ball at the rear of the airplane and whose job it was to guard the Avenger from an attack from behind with his .50 machine gun was twenty-five year old Aviation Ordinanceman 1st Class Lambertus “Bert” Stoffels of Hynes (now Paramount), California who was flying his very first combat mission that morning.

At exactly 8:59am----one minute ahead of schedule----the first Marines landed upon the steaming, black sulfuric beaches and as their numbers began to swell, Japanese defenders emerged from their deep fortifications within the bowels of Mt. Suribachi to rain down a typhoon of terrible and murderous artillery and gunfire upon the amphibious American infantrymen exposed on the beaches below.

In exactly these same moments the four Avengers of the Rudyerd Bay arrived over the awakening island and began to make passes over Suribachi and the invasion beaches in an attempt to locate the hidden sources of enemy gunfire and to call out those positions to the great guns of the cruisers and battleships standing offshore and to the hovering airplanes above armed with bombs and rockets waiting to silence any opposition.

Taking all that was occurring below him in as the island's defenses suddenly roared to life to meet and oppose the Marines and as the terrible battlefield began to take shape, Major Dollins broke the awe and tension of the moment by singing over the radio.....

the words of a hit song from the hit Broadway show Oklahoma! still very fresh in American consciousness.....

I've got a terrible feeling,
Everything's comin' my way

At this last improvised lyric the radios crackled with laughter of the men in the other Avengers and the airplanes above as they all beheld bursts of anti-aircraft gunfire coming their way . . .

And then the Avenger exploded into a great ball of fire. It tumbled out of the sky into the ocean below one hundred yards from the base of Mt. Suribachi. Just fourteen minutes into the invasion. There were no survivors.

Major Dollins' body was recovered by the Marines in the days that followed. Commander Peterson's and Radioman 1st Class Merlan Emberson's remains were eventually recovered, too, but nothing was ever found of ball turret gunner Bert Stoffels. His mother never received anything of him to bury; there is no grave or tombstone with his name upon it in his hometown or in the national cemeteries-----he is just missing, still and officially to this day, and forever more, from the U.S.S. Rudyerd Bay. At the Courts of The Missing in Honolulu his name is carved upon a marble tablet, otherwise his brief life is unknown to all but his family.

These are the sacrifices that have been made for us, to make our world pretty.

The Avengers torpedo bombers and Wildcat fighter planes of squadron VC-77 flew a total of sixty-four strike sorties against the enemy on Iwo Jima on that day.

My grandfather, Tommy Kennard, a sailor aboard the U.S.S. Rudyerd Bay, was there. 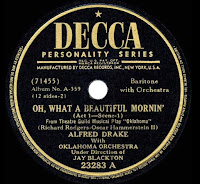 Oh, what a beautiful day...