How do people live and endure times of profound hardship, when the whole world seems to be falling down or tearing itself apart around them? From where is strength summoned to carry on in the face of endless trials and uncertainty? I have often wondered about such things because I, like most, once knew people who had faced what has always seemed to me like impossible hard times, the Great Depression and World War II. And yet somehow these people-----our grandparents and our great-aunts and uncles and all their friends----had found the strength and the fortitude to pass through endless and sometimes hopeless nights to emerge back into the daylight of peace and security once again after so many years.

Mostly I think of my grandfather, Tommy, whose father died of the dust pneumonia in the aftermath of the Black Sunday Dust Bowl storm of April 1935 in West Texas, leaving he and two brothers, all teenagers, as the bread winners for their mother and many younger siblings. I think of him leaving home as just a boy to join the Civilian Conservation Corps, traveling out of his native state to earn his own food and board and a little money to send home to his mother. But mostly I think of his service to our country in WWII, out in the Pacific with the fleet, leaving behind his teenage bride, my grandmother, and an infant son who would grow up to become my father. 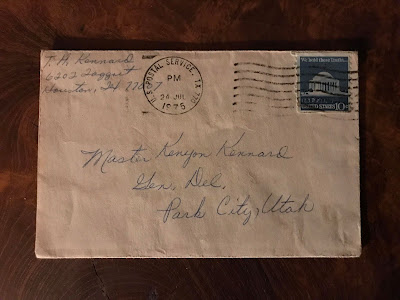 My grandfather never told me the raw details about these times, I was too young when I knew him to be told of such things, of his being present as guns from great American warships pounded and pounded some little island so incessant that days and night were no longer divided; of Japanese airplanes crashing into American ships setting them ablaze and sometimes sinking them with great loss of life; of seeing with his own eyes the Stars and Stripes flying over Mt. Suribachi. I wouldn't have understood these things then. Rather, my grandfather told me of the joy of seeing flying fish in the South China Sea and of bare-breasted native women on exotic islands. But he told my father all of these things he didn't tell me and my father told these things to me as I became older. But more than that, even, I have come to know something of these times and events by a handful of objects and photos my grandfather left me when he died and that I now understand were meant to be clues for me to search and explore and to discover their meaning and perhaps to even help me to discover some things of myself. Indeed, perhaps even how to live and endure and find strength during the hard times of my life.

Seventy-five years ago----this very day----my grandfather Tommy was a young sailor of the U.S. Navy on a journey through the valley of the shadow of death. What he and his fellow travelers would endure day after day and night after night for week and weeks on end through April and May of 1945 would be nothing short of a journey through the burning embers of fiery hell itself; a kind of affliction and madness never before known on this planet or known since as hundreds and hundreds of Japanese kamikaze pilots attacked the U.S. 5th Fleet and crashed their airplanes into the American ships. For a young sailor this was a journey that could not be avoided or escaped. To leave the ship alive---or anything but just barely alive, was impossible. The ships were the sailor's homes, their workplace and their place of recreation and their chances of getting home intact or partially intact absolutely depended upon each being defended to the death. So while the Marines and soldiers fought themselves ashore and inland onto the island of Okinawa an equally fierce and brutal battle developed off her shores between fanatical Japanese pilots wanting to die to defend their homeland and American sailors wanting desperately to live to return theirs. The suffering was horrific----4,907 American sailors were killed, most of them burned alive at their gunmounts from where they attempted to shoot down the kamikaze, their number exceeding even the 4,874 sailors who were wounded in the battle; 36 ships were sunk by the suicide planes and 368 more were damaged, some greatly, making it all far, far worse a tragedy even than that of Pearl Harbor four years earlier. And Tommy did not escape untouched, having both his hands severely burned and suffering from ulcers and a shattered psyche----all of which would later cause him to be hospitalized, first at Treasure Island, San Francisco, and then later at the commandeered Ahwahnee Lodge turned naval hospital at Yosemite National Park.

So, once again I wonder, how do people make it through the darkness of night to pass through back into daylight and I admit that I still don't really know and am constantly trying to understand it. I know that I derive some strength from knowing what my grandfather did then and what he did later in his life and that I am of him and that if he could do such things I should be able to face the challenges and hard times of my life with no less determination and resolve. But what about him, who had already passed through so many troubled years, who had no living father to draw upon, whose childhood family was in shambles and scattered with two brothers also in the U.S. Navy----one of whom would be killed in an accident in Hawaii and another who would be wounded by Japanese bullets; where did his strength and endurance arise from?

I have searched his life and my only conclusion is that it was derived from love. I have read some of what my grandfather wrote to my grandmother during these times and I know that while he was scared, while he would have done anything not to be there, he understood that he had to be there, for her and for my father, to help create a better world for them to live in, and for this love and for the hope for the chance to build a more secure world for them, he could endure the unendurable. I think, too, the strength to endure must have been derived from a love for his fellow crew mates who depended upon each other so completely to survive. Each had a place and each had a job to perform that contributed to their chances of success and survival; each man knew the others depended upon him just as he depended upon each of them and to let them down would be unthinkable and thus reserves of resolve must surely have been found when they were thought to be depleted.

The uncertainties we are facing now are probably unprecedented since WWII and the Great Depression-----or at least that is what many experts are saying in the past weeks. That we will see some hard times is all but certain-----some, like my dear friends in Italy, already have. How long these clouds will linger and how we will make it through these times is impossible to say----but I for one find comfort and strength knowing that others before me have walked through the valley of the shadow of death and managed to pass through it into sunshine again. And like them, I intend to draw upon the great love I have for, and know from, my family and many friends to be strong and to renew my spirits when I am weak or grow tired. And each day I intend to take things as they come, one thing at a time, indeed, to concentrate on splashing just one Zeke at a time!